LucyLures offers a more effective and friendly approach that:

Check out our introductory videos:

LucyLures incorporate a hook-set comprising one or hooks that can be ‘dressed’ with a hook-less lure body. 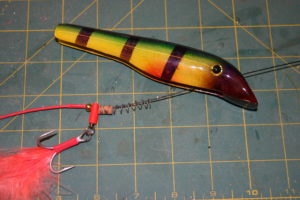 The hard bodied lure bodies prevent the fish from biting down on the hook(s), allowing the hooks to move as increasing tension in the line overcomes the biasing action of the spring.

When a fish takes a firm grip on the lure and turns away, the increasing tension in the line will compress the spring and pull the hook(s) towards the front of the lure hooking the fish in the process.

‘Twist-off’ is reduced by the separable nature of the hook-set and lure body and because of the many degrees of freedom in the hook mounts (the hooks are attached to the titanium trace via swivels).  The design is such that the front hook will ride ‘point down’ so that it is effective for hooking fish.  The rear hook (if fitted) will tend to ride ‘point up’. 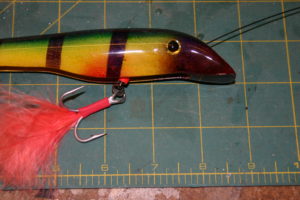